If Anyone Can Do An Ironman Triathlon – Sally Can! 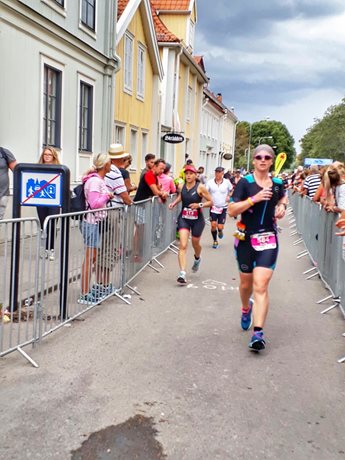 On recommendation from a friend who competed in Kalmar last year, I selected this race to be my second attempt at Iron distance due to its reputation as a beautiful, friendly and enthusiastic course, and I wasn’t disappointed!  My experiences before, during and after the event lived up to its reputation!

The swim is unusual in Ironman in that much of it is close to the harbour walls, or pier, or under bridges, and so made for an excellent spectator course with people cheering most of the way round! The whole course suited me perfectly in terms of terrain and weather conditions. The temperature was about 20 degrees and sunny with clouds, so we got a bit of a break from the heat at times.  The wind picked up when we were on the bike course but whilst that gave us a challenge into the headwind, the tailwind was something to enjoy! It’s a nice flat bike course, with the biggest hill being made up of part of a 6km bridge from the mainland to the island of Oland.  We went over this bridge twice and it was spectacular.  The route took us through beautiful countryside and scenery and was well supported by the locals all out in force to cheer. I made good progress during the bike, picking off a lot of the women ahead of me, and when I finished the bike course, I was in 5th position in my category.  Sadly my running is not as good as my cycling and I lost a lot of ground as I slowed down and struggled!

The 3-lap run course took us through the heart of the town of Kalmar, which is a beautiful and historic town with delightful architecture and cobbled streets, and then out through woods near the coast and then back round.  Again the support was incredible, with the town and local residents embracing it fully, with parties in their gardens, dancing, cheering, music, hose pipes to refresh us.  It was quite a boost in the low and difficult times!  I did have some tough moments in the run.  At that point, you’re 7+ hours in, you’re hurting, you’re tired, probably feeling a bit sick, and you know you’ve still got a few more hours of slogging it out to go! My second lap was particularly slow, but I gave myself a bit of a talking to and picked it up again for my third and final lap.  That’s the home stretch, it’s a bit easier to find new resolve when you know you’ve nearly finished and only got 8 or so miles to go!  As always, the finish line is an emotional affair.  It is right in the heart of the town, with thousands of people watching and cheering, the atmosphere is incredible! And such a relief to cross the finish at last!

This is the second Ironman race I have completed.  Last year when I did Barcelona, it was on the back of a difficult year training-wise as I had been injured.  I did quite well considering and so I wanted to see how I would get on if I could have a good preparation for the race.

With that in mind I did have high expectations of myself and wanted to see vast improvements in all three disciplines.  I did improve in every element, and knocked 1 hour 2 minutes off my time, which is significant, but I was hoping to see even better than that if I’m honest!  I don’t think I’ve fulfilled my potential yet so I think I’m going to have to do another one!

Back to news
Read Next Post
© 2020 Rollos is a trading name of Rollos Law LLP, Partnership No: SO304168
Website Design, development & hosting by mtc.